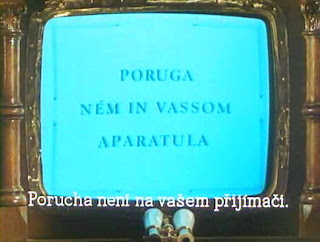 I seem to be having problems posting. Whether it's just blogger goofing on me, or my ISP doing something weird or the combination of all of the above aided by the newly-installed Firefox 2, I don't know, but I'm working to sort it out. Please stand by.

Ladies and gentlemen, I give you the first glimpse of Slovník súčasného slovenského jazyka (Dictionary of Current Slovak).

Now I've been giving the good folks over at the SAV Ľudovít Štúr Institute of Linguistics hard time over the lack of a decent current grammar and/or dictionary. Today, I'm taking it back. And that's all the taking I'm doing today. You see, I got to the bookstore at four in the afternoon, by which time they only had two copies of the Dictionary left, both of them already reserved and paid for. But first thing Monday, I'm getting my own copy and once I have examined it, I shall be certain to share my thoughts with you. I'm sure that there many questions on your mind. Does it include etymology? Which side of the prescriptivist-descriptivist divide will it fall on? Are we perhaps witnessing the birth of a new era in Slovak linguistics and maybe even language policy? Dammit, I can't wait for it to be Monday!

Busy busy busy. Real busy. So here's some good stuff I came across somewhere in between Dutch mining laws and Finnish road signs:

Librivox is a site which "provides free audiobooks from the public domain" recorded by volunteers. The catalog lists several hundred works in 15 languages, including Hebrew, Latin and Old English. I came for Juhanni Aho's "Helsinkiin" (which pleasantly surprised me by its quality matching that of commercial audiobooks. Well done, Tuija!), but stayed for "Three Short Stories in the Maastricht Dialect" (plus the text). I just love wacky dialects!

The Digital Archive (via PaleoJudaica.com) contains many free e-books of older date on all matters Oriental and Near Neastern. Thatcher's/Harder's "Arabic Grammar of the Written Language", "Syriac Grammar" by George Philips and "Higher Persian Grammar" by D.C. Phillott should be enough to capture most of y'all's attention. And if it's not, there's also all kinds of stuff on Ottoman and Persian literature, early Church and general history to keep a guy/gal busy for months. Internet, you gotta love it.

Sahidica is a by-product of my decision to delve into the secrets of the Coptic language (inspired by viewing "The Lost Gospels" and "Stargate: The Director's Cut"*). It includes the New Testament in parallel Sahidic Coptic and Greek with a lexicon of Sahidic and a Bohairic version of NT as a bonus. And the editor seems to have done a great job comparing and editing various published editions of NT in Sahidic. Hooray for good old fashioned philology!


* Yeah, I know, it was Egyptian. But hieroglyphs scare the willies out of me. Next best thing 'n' all.
scripsit bulbul at 20:26 19 comments:

...which is Hungarian for 'the language of love'. Which can only mean French, right?
Well, no.

Earlier today, I was rereading "A cigánybáró" ("The Gypsy Baron"), my favorite novel by the Hungarian novelist Mór Jókai. Set in 18th century Banát, it is a charming story of a young nobleman returning home from exile in Turkey to reclaim his title and his inheritance. The multilingual world of medieval and early modern Hungary meeting the multilingual world of the Ottoman Empire described in Jókai's playful prose is a linguistic feast. I'm still trying to find out what "kurugja" is and who is meant by "Ali Kurd". And does anyone have any idea what kind of tobacco "boktsatütün" ("bokçatütün"?) is?

In chapter 5 ("The Sevenfold Trials of Baronhood"), our protagonist is spending some time at the estate of baron Feuerstein where he is subjected not only to the trials, but - as a poor expatriate - also to the general ridicule of the assembled nobility. Describing how, as a part of the trials, the protagonist has just learned French in one afternoon (How indeed, you ask? Read the novel, I answer.), the narrator offers this insight into the linguistic milieu of 18th century Austro-Hungarian empire:

From now on, they could no longer mock him behind his back speaking French. And German was not commonly spoken in the high society: it is solely a language of love, more suitable for an intimate conversation.

In those days, thank God, I acquired from my master the desire to learn and a sense of straight way, which remains even when the path is tortous.

Why didn't I think of that? Why did it only occur to me today while reading languagehat's first post of the year where he slams William Safire for getting it totally wrong again - this time concerning the Persian suffix "-stan" - and adds:

..."home of" isn't exact, but it gives the general idea. ("Place of" would be better; it's from the Indo-European root *stā- 'stand,' and in Persian it's also used in words like registan 'place of sand, desert' and gulistan 'place of roses, rose garden.')

That's when it hit me: Bulbulistan. An 18th century poetic composition in Persian by a Bosnian poet Fawzī al-Mostarī (Bosnian: Fevzi Mostarac, i.e. Fevzi of Mostar, some sources give the name Fevzi Blagajac) modeled after Saʿdī's "Gulistān". One of the manuscripts of Kitāb-i bulbulistān is preserved in the Bašagić Collection of Bosnian islamic manuscripts in Bratislava's University Library.

Now if only I had thought of bulbulistan back in August ... But I didn't and so I went for the same concept ("place of"), but with the Slavic suffix -ovo, like in the names of Bulgarian cities Veliko Tǎrnovo and Gabrovo (whose inhabitants have - undeservedly, no doubt - a reputation for being skinflints). As for Slovak municipalities with names featuring this suffix, it would appear that they have been named after a historical personality:

The only exception is Námestovo, probably derived from námestie = town square, market square, most likely referring to its status as a market town.

Seriously, bulbulistan, what a great name that could have been. Ah well, too late now. At least I'll update the picture.
scripsit bulbul at 20:00 19 comments: