Ľudovít Štúr speaking before the Hungarian Assembly. In a speech held on January 15th, 1848, he advocated the use of vernaculars (other than Hungarian, naturally) in education and proposed to amend the legislation under debate accordingly.
Image source: www.stur.sk

Michal Hodža, one of the authors of the 1852 ortography reform which established the so-called "etymological principle". This included the introduction of the letter "y" (absent in Štúr's codification), a move widely criticized, especially by Slovak schoolchildren.
Image source: www.stur.sk 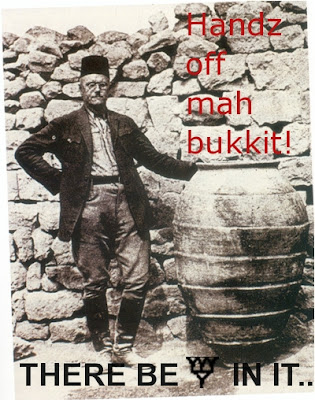 And finally, a big lolthanks to lolpresident for the inspiration. The one with Bush and Topolánek - priceless. And the bukkit category is a masterpiece of the lolart.
scripsit bulbul at 02:10

Bulbul, I'm glad you so publicly jumped on the bandwagon. Suddenly, my covert attempts at sending lolguistics macros to Language Log have failed. I didn't think they were that bad!

Fronting ur partissiplez, I'm in ur sintax
And
It iz I in ur clawse, clefting ur sbjects.

Hey, yours are indeed pretty cool and way better than mine:

(That should have been procliticising ur prepositions, by the way)

To imalize, as in imāla, a change of a long ā into a diftong or even a long ē or ī in many dialects of Arabic. E.g. CA kitāb, Maltese ktieb [ktieb]/[ktiəb]/[ktīb].

Oh, vowel breaking, like what turned Proto-West-Germanic [eː] into OHG, MHG, and southeastern dialectal NHG [iɐ̯] and rest-NHG ie [iː]?

yes, something like that, but in Arabic, it only applies to [a], mostly just long [ā].

But why create a verb "imalize" applicable only to Arabic and unintelligible to non-specialists when there's a perfectly good, transparent term "vowel-breaking" that applies equally well? Specialized vocabulary is all well and good, but sometimes it's taken to extremes.

I perfectly understand your outrage about unnecessary specialist vocabulary. It ticks me off, too, when I find that some scholar is describing a well known phenomenon using idiosyncratic terminology in spite of the fact that there are well established terms in general use.
However, all of that does not apply to imāla, because:
1. the term امالة was coined by Sibawayh and thus has been around for more than 1200 years. Just like, say, tafḫīm (velarization) and tarqīq (de-velarization), they were in use before there even was a science of linguistics. It is therefore hardly a new creation and it is very well known to every Arabist.
2. Imāla is not exactly the same as vowel-breaking. Sometimes has the same effect, but, as I said previously, in only applies to [a]. Furthermore, it can only occur in certain contexts. Some environments - like the presence of [i] - are imāla-inducing, some others - e.g. emphatic consonants and [r] - are imāla-inhibiting. And finally, its exact nature varies: sometimes the outcome of imāla is a diphtong, but often it's not and [ā] turns into a monophtong.

What I find annoying is the tendency of historical linguists to use at least one idiosyncratic phonetic transcription for each language family. If they'd all use IPA, they could read each others' works!

Which brings me a prime opportunity for nitpicking. In IPA [ā] would be a short [a] in the middle tone (of a tone system with a middle level tone). B-)

OK, I give up. What's in that bucket? The site you link to is very confusing.

The cuneiform character is usually read NINDA, meaning bread. It was one of the major clues that enabled Hrozný to "decipher" the Hittite language. I guess it's not as funny if you haven't read his biography :o)
And for the record, I strongly dislike IPA. The vowel portion is ok, but the weird stuff they came up with for consonants is ... Weird. Just consider their symbols for Polish ś and ć. Bleh.
I guess I'm used to the DMG Umschreibung by know. Good enough for Wehr, good enough for me :o)

Just consider their symbols for Polish ś and ć.

What are they? We all have to put up with an often large discrepancy between phonetic and vernacular orthography. Palatal stop in Australian languages are usually written with tj/ty for the fortis and dj/dy/j for the lenis while the IPA would simply be c and bar-j.

I'm not a massive fan of IPA, but I think it has its benefits, however seldom.

In case they display, the IPA for ś and ć are [ɕ] and [t͡ɕ]. (Instead of [ɕ], you could also write [ʃʲ], but nobody does it.) Affricates are always written as plosive + fricative + tie bar, which is cumbersome as long as you're dealing with languages that have few of them, but the advantage is that this way you can write any affricate. Ejective alveolar lateral? [t͡ɬ̕] (disclaimer: I'm not sure if I picked the right apostrophe). Voiced velar? [g͡ɣ]. And so on.

Incidentally, dorso-palatal consonants (where the back of the tongue articulates with the hard palate, and the blade touches the alveolar ridge of the lower jaw) don't seem to occur anywhere in Australia. Ladefoged says the "lamino-palatals" are palatoalveolars, and the sound files on the same page don't contradict that as far as I can tell just from listening. For audio files of dorso-palatals (in Hungarian), go here. For palatoalveolar stops (as opposed to fricatives: [ʃ ʒ]) there are no IPA symbols, so in a "narrow phonetic" transcription all you can do is use [t d] with the "retracted" diacritic (a minus underneath), and in a phonemic transcription the symbols for the dorso-palatals are a good idea...

Incidentally, the x of Standard (!) Mandarin is the dorso-palatal sibilant. It lacks an IPA symbol and can't even be represented using diacritics.